The geology of the Stonehammer UNESCO Global Geopark region is remarkable. It presents a relatively continuous geologic record with a long history of study. Within Saint John the most diverse geology of the region is exposed. Few cities in Canada can compare when it comes to the complex geological diversity seen here. When the larger region of the Geopark is considered, almost one billion years of earth history is represented from the Late Precambrian (Neoproterozoic) to the last ice age (Quaternary) with only rocks of Jurassic, Paleogene and Neogene age absent from the area in onshore exposures.

Stonehammer tells a story of plate tectonics. Our story is about the closing of the ancient Iapetus Ocean and the opening of the modern Atlantic Ocean, a story that started in late Precambrian time about a billion years ago and continues today. 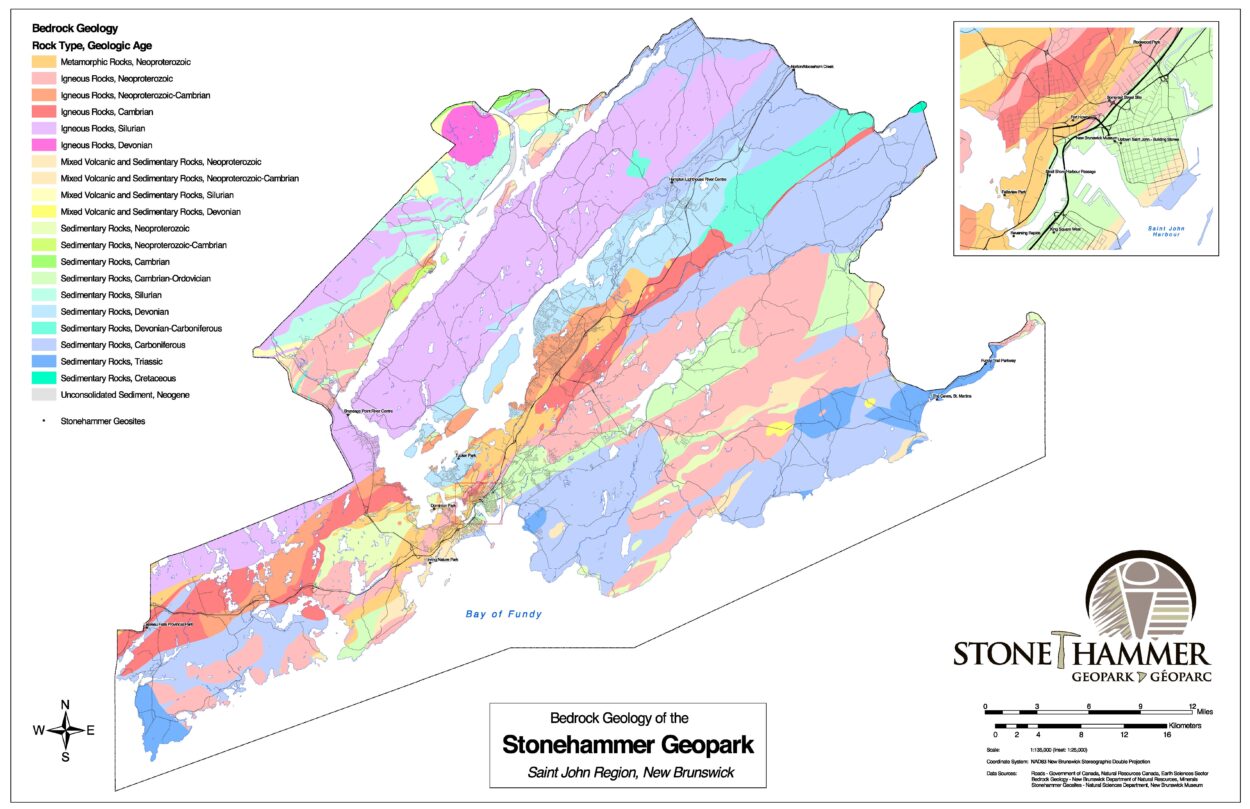 The oldest rocks, belonging to the Late Precambrian Green Head Group, are about 800 million years old. They outcrop along a northeast orientation from beyond the western margin of Saint John to past its eastern limits, forming a central core of Stonehammer Geopark. The Green Head Group forms some of the prominent, high landscape features, including the rock ridges responsible for the “Reversing Rapids” near the mouth of the Saint John River. The Green Head Group contains Archaeozoon acadiense, the first stromatolite fossil and first Precambrian fossil to be correctly described in the scientific literature.

Rocks from the Cambrian-Ordovician Saint John Group (541 – 480 million years old) dominate most of the uptown area of Saint John and outcrop in northeast-trending synclines and down- dropped fault blocks on the late Precambrian Avalonian Orogen. The Saint John Group was first studied in detail by George Matthew in the 1860s and formed the basis for his classic studies of Cambrian fossils. He described the Cambrian-Ordovician rocks in dozens of publications. In 1863 Matthew, Fred Hartt and Loring Bailey discovered the first Cambrian trilobites described in Canada and Matthew described the first Lower Cambrian small shelly fossils. Matthew’s young son William, later a world-renowned paleontologist at the American Museum of Natural History, found one of the world’s largest trilobites, Paradoxides regina here. George Matthew was Canada’s Cambrian expert of the 19th century, and was visited by his American colleague Charles Walcott.

In 1887 George Matthew reported the discovery of Silurian pteraspid fish remains, the first known in North America. Silurian volcanic and sedimentary rocks toward the north of the Geopark were formed as the Iapetus Ocean closed, leading up to the creation of the supercontinent called Pangea.

Devonian rocks that overlie the early Paleozoic terranes consist of terrestrial sedimentary and volcanic rocks. Plant fossils have been found as well as the Late Devonian lobefin fish Holoptychius.

Carboniferous sedimentary rocks outcrop throughout the Geopark and provide some of the most interesting fossil stories. Near the eastern end of Stonehammer UNESCO Global Geopark, the Lower Carboniferous Albert Formation reveals what has been described as the oldest fossil forest in Canada. Remains of almost 700 trees, most in life position, have provided insight into an early lycopsid forest growing along the banks of meandering rivers. Potash and salt is mined from the overlying sedimentary rocks and oil and gas discoveries have been made in the region.

The Upper Carboniferous rocks of Stonehammer are similar to those seen at the Joggins Fossil Cliffs UNESCO World Heritage site across the Bay of Fundy in Nova Scotia. The ‘Fern Ledges’ site in Saint John may be the best-known Upper Carboniferous site in New Brunswick. In 1914 British paleobotanist Marie Stopes determined the age of the Upper Carboniferous ‘Fern Ledges’ shales made famous in 1868 by Hartt and Steinhammer Club members in the second edition of the landmark publication Acadian Geology written by William Dawson in 1868. Hartt, along with Samuel Scudder of Boston, had described some of the world’s oldest insects from this site in the 1860s. The insects included Lithentomum hartii named for Fred Hartt and Xenoneura antiquorum, once thought to have a stridulating organ and the referenced source of ‘chirping insects’ in the primaeval forests. Social activist and palaeobotanist Marie Stopes ultimately resolved scientific arguments about the age of the rocks. Carboniferous rocks have also produced an interesting record of giant arthropleurid trackways, tetrapod footprints, and plant fossils.

Permian-Triassic rocks in Saint John, St. Martins, Quaco, and along the spectacular Fundy Trail Parkway, record the breakup of Pangea and the opening of the Atlantic Ocean. Coastal erosion of the sandstones has produced spectacular sea caves and flowerpot rocks.

The Quaternary history is recorded as late-glacial and postglacial sediments from the Last Glacial Maximum about 20,000 years ago to present. Moraines, glacial outwash deposits, striated bedrock, glacial till, and raised shorelines are all seen in the Geopark. In the Irving Nature Park one of the best regional records of the last ice age is seen at Saints Rest Beach where a tidewater glacier left glacial outwash interfingering with marine clays, containing a fossil record of clams, snails, sea urchins and brittlestars.